From unassigned work areas and flexible meeting rooms to wellness features and amenities, these four associations have found ways to boost productivity and staff morale by selecting and designing new office spaces.

Moving into new office space is usually an opportunity for an association to start over and experiment with workplace design and functionality. It’s a chance to adapt to changes in workflow and meet new workforce expectations. In fact, a space change may be exactly what an association needs to ensure it is providing a comfortable, healthy place for staff to gather each day.

With productivity, collaboration, and health in mind, here’s how these four associations either redesigned their workplaces or moved into new office space in the past few years to achieve specific goals.

In 2013, when the International Facility Management Association (IFMA) moved to its new building—called the Service Center for Excellence—leadership took an unconventional approach to encourage collaboration.

“Since we were talking about breaking down barriers, both vertical and horizontal barriers within the organization, it very quickly became clear that the open layout with unassigned seating was an approach that would work for us,” Communications Manager Jed Link says. 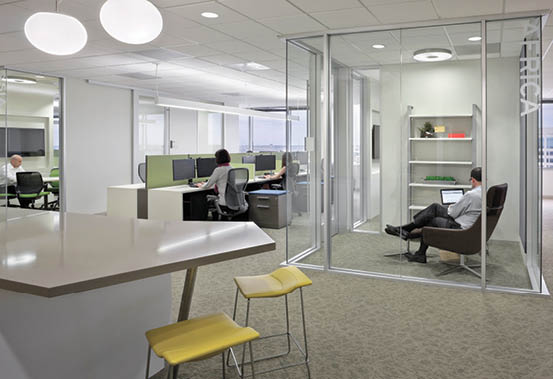 The open seating allows IMFA’s 58 employees to sit with whomever they need to work with on any given day and easily pick up and move to a new spot if necessary—but it took the right technology and training to make it work.

Employees just need a laptop, which hosts all communication functions and can be easily plugged into a port with a monitor and keyboard. Work areas, meeting rooms, and quiet rooms all feature these stations, so changing seats or leaving the office is as easy as ejecting the laptop.

But establishing this office culture took time and training: Link estimates it took a year and a half for staff to fully adjust.

“When IFMA first made this move into the new space, a significant amount of time, energy, and effort went into training staff to use the new workplace as effectively and efficiently as possible,” he says. “To that extent, there was an active effort to remind people to avoid sitting in the same place every day.”

The point was to encourage learning and collaboration by ensuring that employees regularly sit and interact with different coworkers. “That wouldn’t work if people just got comfortable and had unofficially assigned seats,” Link says.

Leadership actively reminded staff to sit strategically each day based on their workload and to utilize the full features and work areas offered in the building. Four years later, staff veterans know how to properly use the space, making it easier for new staff to adjust more quickly to the culture.

Unassigned seating “directly impacted the way that staff communicated with each other,” Link says. “It was much more common to work with somebody from a different department, and the vertical hierarchy became less important. Directors, executive team members, became much more accessible.”

The American Society of Interior Designers (ASID) put its industry expertise to the test with its newly designed office space, completed June 2016, which has earned both the WELL Building Standard and LEED certifications. The goal: “to attract and obtain talent, and have them perform at their very best,” says President and CEO Randi Fiser. 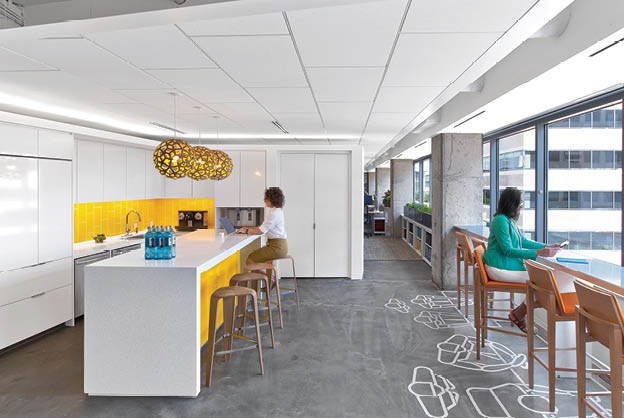 Fiser and other leaders wanted to make sure ASID is a healthy, appealing place to work for current and potential staff. The WELL certification demonstrates that the office meets a high standard.

The certification “keeps us on track to maintain this high level of standard for our office,” Fiser says. “And it’s also nice to not just say it ourselves that we designed an office that supported health and wellness, but that somebody else came in and said, ‘Yes, you’ve achieved the highest level of health wellness within your state that could be defined by our criteria.’”

The WELL Standard is based on seven concepts: air, water, nourishment, light, fitness, comfort, and mind. To fulfill requirements in these areas, ASID’s office purifies and monitors the water and air, provides fruits and vegetables as snacks, utilizes a circadian lighting system that adjusts color according to time of day, hosts a fitness center and wellness room, and provides flexible meeting areas and furniture, among other features.

The goal is to change it to continue to enhance the space.—Randi Fiser, American Society of Interior Designers

To continue improving the space and create a model for future offices, ASID will act as a “living laboratory,” Fiser says. Staff will participate in research studies on interaction, movement, and the environment to see how well the design promotes productivity, health, and wellness.

“The goal is to change it to continue to enhance the space so that we constantly learn from it and evolve the space as we need to [in order] to get to those outcomes we want of engagement, productivity, and retention,” he says.

When the American Intellectual Property Law Association (AIPLA) moved into its new space in August, there was nothing there but concrete floors and pillars. Staff didn’t even bring any furniture with them, except one small round table. It was a time to start over and try something new.

With the chance to design a new workplace, AIPLA sought to create a spacious collaborative environment, complete with open work stations grouped in neighborhoods and multiple work and meeting areas. 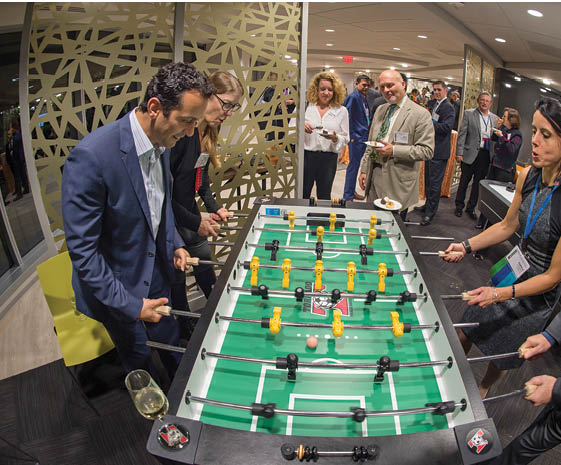 “The layout now means that I don’t have to walk down a very long hallway to meet anybody,” Executive Director Lisa Jorgenson says. “I can go to the finance department or the meetings department or any of the other departments in just a few steps because of the way we laid it out.”

To balance this openness, the office includes huddle rooms with equipment and video conferencing capabilities to allow for private conversations. A noise-controlled wellness room provides a respite when employees need some quiet time.

When searching for a new space to rent, AIPLA thought about more than just its own work area. It also considered the amenities offered in the building. The one it selected offers a free fitness center and a large club room with ping pong, air hockey, and vending machines.

The club room serves as a place for the staff of 22 to gather together to eat and relax during the workday, says Chief Operating Officer Meghan Donohoe, and as a venue for parties of 100 or more people.

In the club room, “you change your relationship that you have with your peers, with your colleagues, because you’re going to take them on in a game of ping pong,” she says. “I think it really helps a lot.”

The ability to renovate the space from the get-go also gave AIPLA the opportunity to incorporate its brand into the design, an especially important feature for a group that focuses on intellectual property. The wall colors, furniture, and patterns in the light fixtures reflect the group’s logo, allowing people to connect with AIPLA wherever they are in the space.

“This really was an opportunity for us to address morale, address amenities for the staff, and really create a collaborative space,” Donohue says.

It was all about open design to accommodate future growth and tap into the natural outdoor surroundings when the American Society of Anesthesiologists (ASA)moved into a new, modern headquarters in 2014.

In the new building, an auditorium is built to slope with the natural incline of the ground, and the windows open up to a view of a pond and outdoor green areas. Glass-enclosed offices and meeting spaces ring a central sky-lit atrium. Coupled with the new open work areas, the layout provides plenty of opportunity for interaction.

“Because of the openness and the airy feeling there, [the building] has accomplished the goal of increased collaboration among various departments in the society,” ASA Director of Public Relations Theresa Hill says. “More of the departments are working together to accomplish the goals for members.”

Like AIPLA, ASA introduced open cubicles and more meeting spaces to ensure greater collaboration across departments. And walking paths, as well as outdoor seating where staff can hold meetings during the warm months, help its 137 employees get away from their desks.

Find these articles and more on this site and at associationsnow.com

The space has also benefited communications between staff and members. Its Wood Library-Museum of Anesthesiology features exhibits documenting the specialty’s history and provides areas where members can perform research.

“In addition to the members coming to visit to see the exhibits or researching, we also have numerous committees of members … come in to do their usual committee meetings at the building, which also fosters collaboration among staff and the members,” Hill says.

But for ASA, the modern design, open work areas, and historical wall in the atrium celebrating anesthesiology aren’t just about function. The goal is “to increase [visitor and staff] pride in the very deep and wide specialty,” Hill says.

[This article was originally published in the Associations Now print edition, titled "Moving In, Moving Up."]

When an association considers moving into a new office, or renovating its existing one, it needs to know how the space can help support and encourage the work of the staff and achieve success for the organization. But what defines the best work environment for employees has evolved over the years.

"In the past, what you would have had is a lot of offices. You have that hierarchy where the more senior people have offices, with open work stations in the middle," says Thomas Fulcher, executive vice president at commercial real estate firm Savills Studley. "I think what's happening now is people are reevaluating not just for the sake of getting tighter in terms of space, but reevaluating how they work and saying, 'How do I most effectively work in my space?'"

As organizations reconsider their workflow, they are increasingly looking for spaces that promote collaboration, communication, and sustainability. Specifically, they have fewer closed-door offices, more open meeting areas, and, in some cases, "bullpen"-style work areas, Fulcher says.

To enhance openness, glass is often installed, and many organizations are choosing more sustainable and accessible buildings located in areas where employees can walk to restaurants and public transit.

Office spaces are also shrinking to bring people closer together and lower costs, a trend that is requiring landlords to offer more amenities. For example, many buildings now offer roof decks, gyms, and conference centers that are included in rent costs.

Many of these trends are a result of the 2008 recession, Fulcher says. When money became tighter, organizations began reevaluating their space to see where they could save, cut, and shrink, opening the discussion around and opportunity to experiment with new office layouts.

"All those things were on the table and really changed the way people looked at office space," he says.—A.B.

Alex Beall is a freelance writer based in California.