From privacy scandals to algorithm changes, handling social media for associations is harder than ever. Here’s how the experts are keeping up.

On January 11, Facebook sent a shudder through the collective association world with an announcement that it was rejiggering its News Feed. “You’ll see less public content like posts from businesses, brands, and media,” wrote CEO Mark Zuckerberg in a post about the decision. For nonprofits that relied on Facebook as an effective and affordable way to spread the word about their products, services, and initiatives, the move was a wake-up call to rethink their social media strategies.

I won’t lie, I had a day of panic,” says Carly Nwabueze, social media manager for the IT governance association ISACA. But in the weeks that followed, she saw increased opportunities for the association to adapt to the changes. These have involved not just adjusting how it uses Facebook, but also rethinking the tactics it deploys elsewhere in its social media mix and what metrics it pays attention to.

Every social media manager does that work as part of the job. But the process has accelerated in the past year, as a “pivot to video” on various platforms was followed by the News Feed changes, which in turn were followed by a viral call to #DeleteFacebook in the wake of the Cambridge Analytica scandal and concerns about user privacy. All serve as a reminder that associations are effectively planting in somebody else’s garden, and that their strategies need to be iterative to match.

“Associations, like all businesses, have to be aware of how those channels are changing and what is the right role or strategy they play for the business outcome that the entity or business or association is looking for,” says Stephanie Yanecek, senior vice president of marketing and communication services at SmithBucklin.

Drama has defined Facebook in 2018: fake news, privacy violations, accusations of lax response to trolls and hate speech, algorithm tweaks. But it remains a massively influential platform. Though one survey reported that nearly one in 10 Americans deleted their accounts last spring because of privacy concerns, the company says its user base is still growing, according to a July SEC filing. (The filing does show user numbers plateauing in North America and declining slightly in Europe.)

At a recent ISACA conference during the height of the Facebook controversies, Nwabueze informally polled members—people who pay attention to online security for a living—and didn’t hear much talk of disengagement.

“Because we are in compliance and cybersecurity and risk, some people just don’t like using social media at all,” she says. “But no one said that they stopped using Facebook. If they didn’t use Facebook, it’s because they never did.”

However, the association has retooled its Facebook presence, using the News Feed changes as a catalyst to make its posts more interactive and based on questions, rather than overtly promotional about meetings and membership.

“Our communications team, our marketing team, and our business leads sat down and talked about what ISACA should do so we can benefit from this change,” she says. “And one result of that was to cut down on our promotional materials and stock photos and have more of a conversation with our followers.” Where once ISACA focused more on likes, it now pays closer attention to comments and other responses.

But an association can also be comfortable moving on from the platform if it feels that the engagement isn’t there. Meredith Barnett, digital communications manager at the Council for Advancement and Support of Education, has shifted away from it.

“Frankly, I pivoted away from Facebook as a social platform in the past year,” she says. “It has nothing to do with the changing algorithm and more to do with the fact that our members are engaging there but not necessarily looking for CASE content on Facebook. … We ultimately decided that it wasn’t the place to get the most value for members.”

Instead, Barnett says, CASE has focused more on Instagram for visual content and LinkedIn and Twitter for newsier, more career-focused content—its monthly Twitter chats with higher-education professionals have generated stronger engagement among its members. And regardless of the platform, the organization has discovered that more visuals generate more attention: While Facebook usage has remained roughly the same in recent years, according to the Pew Research Center, visual tools like Snapchat and Instagram (owned by Facebook) are on the upswing, and YouTube has the highest penetration of all, reaching 73 percent of Americans. (See “A Pivot to Video, and Fast” at right.)

“We invested in on-staff video capabilities about five years ago, and we’ve consistently seen the demand for those consistently double year over year for the past five years,” says SmithBucklin’s Yanecek. That growth has brought an increase not just in the amount of video but also in the diversity of uses, from narratives with high production values to quick-hit informative pieces.

And reuse of that material across multiple platforms has become more common. “What we look at is, what’s the message the video is getting across?” Yanecek says. “Then we look to repurpose the content for different channels once the larger message and the bigger video has been put together. In certain channels you need quick sound bites and others more. I don’t think there’s any hard-and-fast rule, because it really starts with who’s your audience and what’s the message?”

A Pivot to Video, and Fast

For all its troubles, Facebook remains king of the social media landscape: 68 percent of U.S. adults are users, according to a January 2018 Pew Research Center survey. But that figure has not changed much in recent years, while video- and image-based platforms are rapidly rising in usage. Here’s a look at the percentage of American adults who say they use any of the following social media sites online or on their cellphone. 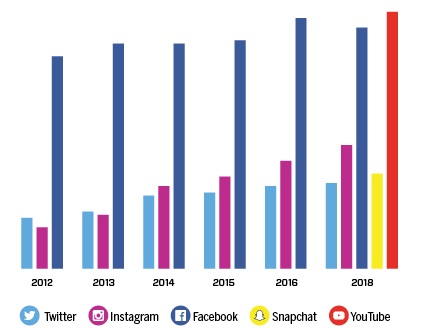 Of course, the nature of social media means that all of this might change tomorrow. Facebook and Twitter will likely adjust their algorithms yet again, or user preferences might shift in a different direction.

Last year, Barnett says, CASE formalized a comprehensive, cross-platform social media strategy with a set of goals and favored tools. But it’s already seen some of the goals in that document need to be revisited—hello and farewell, LinkedIn Pulse—and the association has taken a more day-to-day approach to its strategy.

“It’s iterative, and it’s a hard process if you’re a social media manager,” she says. “You are working every day to keep trains running and to update things in the short term, but then you have to carve out time to think in the long term and to revisit those goals and then plan ahead.”

Carolyn Barth, CEO of Digital Content Strategy, LLC, and former director, digital PR and media, at the American College of Prosthodontists, recommends an audit of the tools currently used by the association and what’s being said about it there, followed by a quarterly approach to strategy discussions to match the way many associations manage their years around board meetings and other strategic-planning discussions.

“Data always tells a story,” she says. “For example, three years ago I spotted 3,500 mentions of our specialty on Instagram, and that data was sending us a message that Instagram was a real channel for us. Five years ago, a member video on Facebook that took off showed in seconds how videos on social media do engage other members. You can spot future trends early this way. Today, videos on LinkedIn, Facebook Live, and Instagram Stories are popular. Those are three new breadcrumb trails to follow.”

There are abundant management and measurement tools to assess that success: Google Analytics, Sprout Social, Meltwater, Cision, and TrackMaven, to name a few. But a successful approach to reassessing your social media toolbox will involve both crunching the numbers and talking to members, Barnett says.

“There’s a quantitative side to our engagement data, but there’s also a qualitative side where I talk to people at our conferences and listen to what they’re working on,” she says. “I pull the data and the things our members are facing and use that to try to figure out what to give them on each of our social platforms.”