You’re an association professional with a specific job role and skill set that you can readily describe on your resume and elaborate on in an interview. But do you know what you’re worth in the association job market? Some insights from the latest ASAE Compensation & Benefits Study.

Whether you’re assessing how your organization’s compensation structure compares with others or determining what to ask for in a salary negotiation, ASAE’s 2018-2019 Association Compensation & Benefits Study, based on ASAE Foundation research offers a detailed analysis of the sector that can help you evaluate how your compensation stacks up and right-size your expectations.

In this snapshot of new data revealed in the study, which is conducted every two years, Associations Now looked at three areas: trends in CEO salaries, data on non-CEO positions, and the outlook for organization-wide merit-based raises. See how your next direct deposit measures up.

Trades pay more. The 2018 results are consistent with patterns from previous ASAE studies. On average, trade association CEOs earned at least $20,000 more than their peers at professional organizations. In addition, base salaries for CEOs, as well as bonus and deferred compensation, rose as budget size increased in all types of organizations. Here’s an overview of a few budget categories: 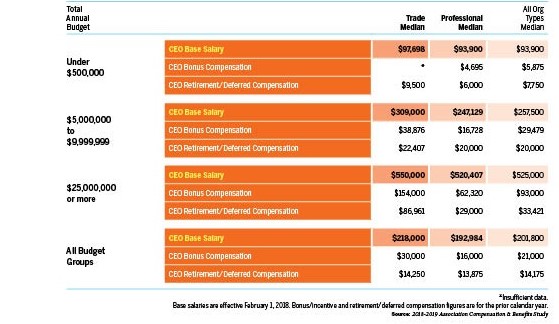 CEO salaries static. Although the U.S. unemployment rate fell to 3.7 percent in September, a nearly 50-year low, research shows that wages have struggled to pick up steam. And this year’s ASAE study suggests that association CEOs are facing flattening compensation.

But a more detailed breakdown of the data shows that the median varies depending on numerous factors, including an organization’s location, staff size and budget, industry served, and membership structure.

Base salaries in big cities. Here's how median base salaries for CEOs stack up in some of the largest metropolitan areas across the country. 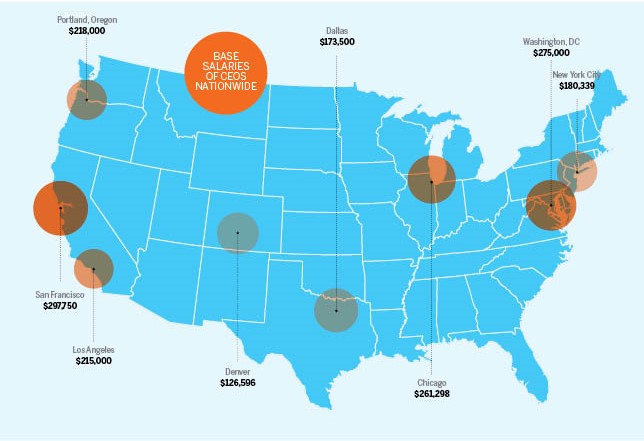 As with CEO compensation, budget size plays a large role in determining how much non-CEO positions earn. In other words, a bigger budget typically means a bigger salary. Here’s a look at the breakdown for three common association positions: 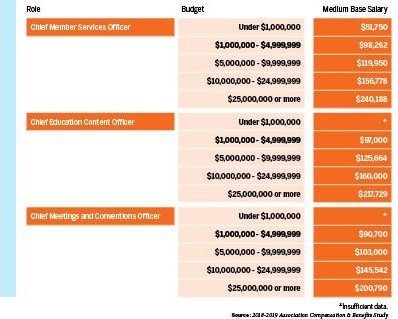 Most responding organizations said they offered different types of salary increases. The most common was merit-based increases (71.2 percent of respondents offered them). Unlike CEO compensation, merit increases didn’t vary significantly based on staff size or type of organization. And with a recent WorldatWork survey reporting that for-profit workers can expect a 2.8 percent merit-based pay increase, associations seem to be competitive on this front.

The news is even better for employees who have been promoted. The study reports that association professionals can typically expect to see a 10 percent increase when they move up in the ranks.

Dive Into the Data

The Association Compensation and Benefits Study, 2018-2019 Edition, is available online through ASAE’s AssociaMetrics platform or in print through ASAE’s bookstore. Both the online and print versions provide: