There’s nothing like a little competition to break down departmental silos. During its last staff retreat, association management company Partners in Association Management put a twist, or an edge, on a team-building exercise with its Battle of the Airbands.

Armed with air guitars and some confidence, staff performed for judges, competing for rock-n-roll glory. Employees were broken up into five teams, three judges, a host, and a show manager. The assigned teams picked a band name and a song to perform and were free to rehearse, choose costumes, and incorporate props or signs. 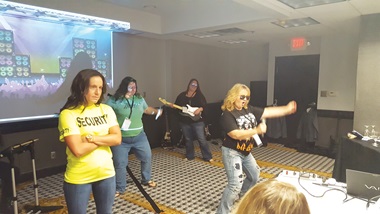 “We really want people to recognize the talents that everybody has in our office and feel more comfortable working with people,” Vice President Rachel Luoma says. “And we believe relationships are based on the strong foundation of trust, so sometimes that forced interaction can create that opportunity for people to build trust and to get to know each other.”

Assigning teams was important because “people tend to pick who they know and who they work with, and we really wanted to create an opportunity for people to build rapport with other people who they may not work with on a regular basis,” Luoma says.

Of course, not everyone was thrilled to perform. Extroverts tended to take center stage, and more introverted participants could carve out a background role while still getting out of their comfort zone. “For us, a little bit of discomfort is a good thing because it shows that you’re growing as a professional,” Luoma says.

And the winners of the battle? The band Members Only, named for the ’80s-style jacket, took home the victory, with the lead man lip-syncing Robert Palmer’s “Simply Irresistible” and the ladies—clad in black clothing, red lipstick, and slicked-back hair—mimicking the music video’s dance moves.

[This article was originally published in the Associations Now print edition, titled "Rock On."]

Alex Beall is a freelance writer based in California.