Here's a little secret from membership-savvy associations: While new-member acquisition offers the thrill of the chase, member retention brings long-term stability. It's built on engagement, value, and connection, and it starts the day a member joins.

Before 2014, when Kerri McGovern looked at the American Chiropractic Association’s membership numbers, she saw churn. “We recruit very well,” she says. “But every month we would drop almost that same amount, because we weren’t getting them to renew.”

It’s a cycle many associations know well but, for one reason or another, don’t try hard enough to break.

“I showed one board that I’ve been working with recently that they lost, over a 10-year period, 9,000 members,” says Bill Schankel, CAE, account executive at Association Headquarters. “And every meeting they were focused on new membership campaigns, new membership campaigns. We finally did a 10-year analysis and said, hey, you don’t have an issue with bringing new members in. You have an issue with keeping your old members.”

McGovern, senior director, marketing and member services at ACA, says she knows why this happens: “Well, recruitment is sexy. Retention is hard work.”

Retention is also a great way to make money, rather than burn it. The old business adage that it costs several times as much to earn a new customer as it does to keep an old one applies just the same to associations. But, more important, long-term membership is where the real revenue is, and not just for recurring dues payments.

“The amount of money that a member spends increases over the course of the lifetime of the member,” says Erik Schonher, vice president at Marketing General Incorporated. He says MGI’s annual benchmarking research consistently validates the value of dedicated, returning members. “If you really want to make money on membership—if you really want to make money in an association—it’s not about acquisition.”

McGovern and ACA have adopted that philosophy, as have other associations that see member retention as a strategic imperative. “We keep saying, ‘I don’t want one-year members. I want 20-year members,’ because that is our revenue stream,” she says.

Schonher says he can identify associations with lower retention rates by the language they use. They refer to their renewal efforts as a “billing cycle.” The problem is, a bill requests payment for a service already provided. “With renewal, you’re reselling,” he says. “If I haven’t delivered it yet, then I’m asking you to pay upfront. I’m asking you to do me a favor, and it’s a different ask, and it’s a different approach.”

A renewal effort of at least seven “touches” correlates with increased retention rates, according to MGI research, but earning the next dues payment starts on day one of membership, says Schankel. “It’s all irrelevant if the members don’t feel engaged,” he says.

That’s why ACA launched an ongoing member-onboarding and retention campaign in 2014. For new members, it starts with a mailed welcome letter and follows with a series of messages across multiple channels over the course of the year, leading up to renewal notices:

A series for members renewing after 10 or more years of membership—another segment ACA identified as having high attrition—follows a similar pattern, though with a shift in tone toward reinvigorating members’ engagement with the association.

The effort has paid off, as ACA’s overall retention rate increased from 90 percent to 93 percent between 2014 and 2015—a change that doesn’t sound like much on paper but, in the context of retention, is “monumental,” says McGovern.

Ed Rigsbee, CSP, CAE, association consultant and author of The ROI of Membership, says a multichannel, multitouch effort like ACA’s works to build a relationship with the member that a new-member packet alone can’t achieve.

“When you send out something once, it’s only one point,” Rigsbee says. “But if you have a drip-out campaign for the entire year and rotate it around between call, electronic, and actually physically mailing things, then at the end of the year the conversation the member has with him or herself is, ‘Gosh, they’ve been paying attention to me all year. Why wouldn’t I renew?’”

In 2016, paying attention to the member also means paying attention to data. And, particularly, what that data says about who renews and who doesn’t. Schankel suggests tracking more than one overall retention rate. Instead, an association should track retention within multiple key segments, such as first-year members, long-term members, or members in specific types of jobs or organizations, he says.

The Society for Human Resource Management uses data to craft the messaging for its own onboarding and retention efforts, based on observed drivers of retention, says Lisa Diener, director of marketing at SHRM. “We know that there’s a handful of products and services that drive that retention. So, we sequence them in small bites, those different products and services, to try to get people engaged in them right off the bat. Because we know, if they use those, they’re more likely to renew,” Diener says.

One early message in SHRM’s onboarding series—which comprises 20 to 25 touches in 13 months— urges new members to complete their online profiles, which serves as both an instance of engagement and an enabler of better service from the association, both leading to a higher likelihood to renew, SHRM’s data shows.

It’s not enough, though, to merely get members engaged and hope they renew, says Schonher. The power of detailed tracking of member behavior is in making a direct link between engagement and the value of membership—and the reason to renew.

“Reward your members. Congratulate them. Remind them of what they’re getting,” says Schonher. He recommends “closing the loop” on value received on an ongoing, individual basis. “Knowing what they participated in and when they’ve done it is key to being able to remind them in a meaningful way.”

To be able to make those links takes a long-term investment in data management. For associations that haven’t done so already, now is the time to start.

“Many associations come to us, and they are living a real nightmare because, up until about five years ago, they really didn’t keep track of their data very well,” says Schonher. The good news, he adds, is that association management systems have improved rapidly in recent years, putting more and better member data for associations within reach.

Despite such technological advances, a personal touch is still a crucial element in member retention. Members are, after all, people, and they join associations to connect with others.

More than 40 percent of members who are called at renewal time end up renewing, either on the call or shortly after. —Laura Davis, American Academy of Hospice and Palliative Medicine

The American Academy of Hospice and Palliative Medicine (AAHPM), like ACA and SHRM, integrates phone calls into its onboarding and retention efforts, with calls placed to new members and members who haven’t renewed after three renewal notices. While calls are more labor intensive than mail and email—staff place about 100 calls per month—the payoff is worth it: More than 40 percent of members who are called at renewal time end up renewing, either on the call or shortly after, says Laura Davis, director of marketing and membership at AAHPM, which is managed by Association Management Center.

“It’s trying to do that personal touch in an era when there’s not much of that going on any longer,” Davis says, and it’s driving hundreds of thousands of dollars in revenue for a few thousand dollars in staff hours. “When you see the numbers … there’s absolutely no reason why you wouldn’t do something like this.”

Phone calls, letters, emails, welcome packets, invitations to volunteer—it all adds up to a relationship with the member, Rigsbee says, which, if built around member value, will make the decision to renew an easy one.

“There are basic buying motives that we have to understand, and it doesn’t matter whether this person is a 23-year-old, a 33-year-old, or a 63-year-old. They’re looking at it, and saying, ‘What’s in it for me? … How did I create profit or gain for this? How did I improve my life?’”

[This article was originally published in the Associations Now print edition, titled "Turn Off the Churn."]

The Math of Churn

It's easy to underestimate the cumulative effect of membership churn. Consider a new association that begins with zero members and adds 1,000 new members every year. If retention among first-year members is 70 percent and is 90 percent among other members, and 10 percent of new members each year are reinstatements, it takes just eight years for the association to have more past members in its database than active members. The impact of sub-par retention is a blind spot for many associations. "I have never seen a client who didn't have a file of former members that is at least twice as large as their current membership," Kevin Whorton, president of Whorton Marketing & Research, told Associations Now in 2014.—J.R. 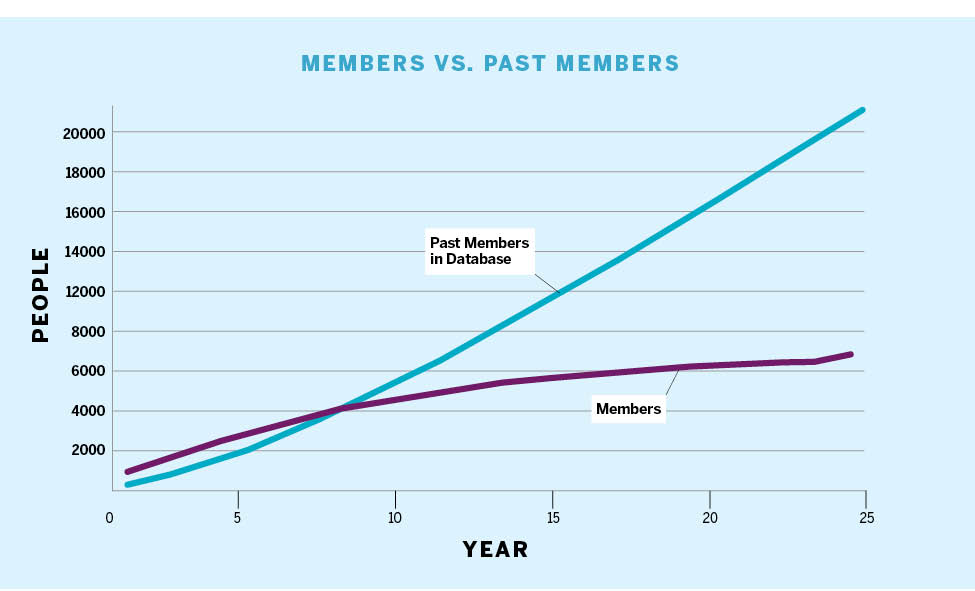 Retention: Spend a Little, Save a Lot

How much more does it cost associations to recruit new members than to keep existing ones? Some numbers from Marketing General Incorporated’s 2013 Membership Marketing Benchmarking Report offer an estimate.

Joe Rominiecki is a contributing editor to Associations Now.