From strategic planning to everyday operations, associations are often stymied when it comes to clear decisions. Here is how a few experts chose to choose wisely.

About two years ago, the Association of American Medical Colleges (AAMC) decided to change how it handled its high-level decision making. Too often, ideas rose up that hadn’t been fully vetted, which made for inefficiencies. “When something might have misfired, or someone was surprised and saying, ‘Gosh, where did that idea come from?’—those questions landed directly with our CEO,” says Jennifer M. Schlener, chief of staff at AAMC. “Our leadership team itself recognized the need for a different approach to both mitigate these surprises and make better decisions more quickly.”

What AAMC learned is that those misfires occurred either because the idea didn’t align well with the association’s strategic plan or because a critical department didn’t have an opportunity to weigh in on it. In response, AAMC launched a three-person executive committee that includes Schlener, the COO, and the executive vice president and is responsible for efficiently handling large strategic decisions and new product ideas.

That sounds counterintuitive: How does an association become more efficient by adding another layer to the org chart? “More than once I heard the term ‘bureaucracy,’” says William T. Mallon, senior director, strategy and innovation development at AAMC, of the early response to the executive committee proposal. But Mallon and Schlener say the system works speedily and well, prompting staff to be more deliberate about its actions.

It’s not easy to make clear decisions at an association: Rational thought often contends with risk-averse stakeholders, bad data, perfectionism, an itchiness to make any decision (even a bad one), and other roadblocks. Associations like AAMC, however, have learned that better awareness of irrationality and blind spots can help them better address them—and make better decisions in the process.

Shelley Row, a consultant, speaker, and former executive at the Department of Transportation and Institute of Transportation Engineers, says there are a few warning signs when an organization is about to make a bad decision. Board members close up. Or they speak up, but in the name of delaying—can we get one more report? Another?

In those situations, Row says, it’s important for leaders to recognize the problem in the room for what it is—fear—and bring it out into the open. “Get those fears into the room without calling it fear,” she says. “When we’re trying to make a decision and it just isn’t gelling, try probing that discomfort. I might say, ‘What’s not sitting right? What’s making us uncomfortable about this decision?’ What that does is it forces them to put language around the discomfort. Once it’s articulated, it’s easier to work with and find solutions to move forward.”

A Matrix for Decisions 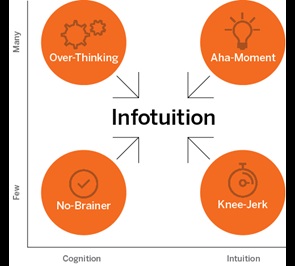 Former association and U.S. Department of Transportation executive Shelley Row uses this chart to show the continuum of thought and emotion that goes into decision-making. Problems with many variables that are addressed solely through data lead to over-thinking, Row argues; exclusively using intuition can lead to knee-jerk decisions. “Aha moments” reflect a balance of thought and feeling. “For particularly tough decisions, executives benefit from time away from the decision,” she says. “The brain continues to process the problem you’re working on, and it will combine the cognitive information with the subconscious information from your history and experience. That’s where you get the aha moment.”

Row is a strong advocate for data-driven decision making, but she also says that it inevitably is done “on a continuum between thinking and feeling,” as she writes in her book Think Less, Live More (see “A Matrix for Decisions” on page 53.)

For those who are skeptical, she recommends conducting postmortems on big decisions to consider how data influenced the decision. “If it turned out it wasn’t a good decision, ask, ‘What was going on that pushed us in that direction?’ Sometimes executives will say that they would listen to the data and not their gut.”

Dale West, CAE, vice president of healthcare and scientific industry practice at SmithBucklin and cofacilitator of SmithBucklin’s Leadership Institute, agrees that data can sometimes be used as a crutch for boards struggling with a strategic decision. Associations can avoid that paralysis by analysis by establishing ground rules for what metrics will matter early on.

But he adds that more often boards are waylaid by not taking enough time to discuss what problem needs fixing. “I think that that happens in a lot of decision-making situations,” he says. “People have a knee-jerk reaction and immediately think what’s right in front of them is the actual problem to be solved. And when we go deeper we realize that that is actually not the problem that has to be solved.”

For instance, in 2015 West was serving as the executive director for the Society for Gastroenterology Nurses and Associates (SGNA), which was pressed to respond to an outbreak of a “superbug” called CRE that was affecting GI patients. West scrapped the planned agenda for a board meeting to focus entirely on the outbreak. From West’s perspective, there were two decisions to make: what to do right away, and what to do in the long term.

“Obviously, the overarching problem is easy to see, but we had to decide as an organization, what’s our role?” he says. “And when we look at our role, how quickly do we need to act?” In the short term, SGNA served as a liaison for members, gathering and disseminating information from the FDA and CDC for the GI unit managers that were under pressure to respond to the outbreak. But it also planned for how to respond after the outbreak subsided, developing new education and training programs and establishing a new clinical guideline for responding to similar events in the future. “That takes time, because you do have to have the right data to make those changes,” he says.

Establishing a clear idea of what the short- and long-term problems are, West says, helped the board move quickly but deliberatively. “Most of the time if we step back and think about what the problem is, and the process that we’ll go through, it will make the decision-making process so much easier, and the outcome of that process much more successful,” he says.

But even once a board deliberately identifies a problem and proposes a solution, it can still hesitate. West recommends establishing benchmarks for monitoring the decision, along with reminding the board that it can always course-correct. “Sometimes people believe that once a decision happens with the board, that’s it, that’s the decision,” he says. “But every decision is not going to be 100 percent right or 100 percent wrong. Your ability to keep an eye on the metrics and change course is what’s really important.”

So much of effective decision making involves heading off potential problems before they begin to drain an association’s resources. AAMC surfaces those problems quickly via process. Under its framework, each new idea passes through multiple “gates,” where different stakeholders consider whether it’s met established criteria before moving on.

Every decision is not going to be 100 percent right or 100 percent wrong. Your ability to keep an eye on the metrics and change course is what’s really important. — Dale West, CAE

While the idea of multiple gates sounds forbidding and slow, Mallon says the process moves quickly. When the executive committee process was put in place, it came with a goal that every idea submitted for consideration for the first stage would get a response within eight days. “It was really important to give a clear signal that this was not going to be a process where things get bogged down for weeks and months, where people are sitting around waiting for an answer,” he says. Thus far, Mallon says, the committee has always met its eight-day deadline.

And even though the answer is sometimes no, it’s a quick no, and one rooted in a requirement that people with ideas square them with AAMC’s strategy and recognize who needs to be involved. “Nobody wants to be doing work that ultimately won’t be deemed strategically important by the organization,” Mallon says.

Find these articles and more at associationsnow.com

He points to one recent success story involving a learning tool that members had been requesting. The multistage process revealed a need for market research and technical integration. “In the past, we probably would have gone with it at 60 miles an hour and realized right before launch, ‘Oh, guess what, we can’t actually register people for this,’” he says. “Or we design the whole thing without really understanding the best method for delivery.” But, because of the process, they were able to identify those concerns early on and get them addressed.

“I definitely see us making better decisions and being more nimble” says AAMC’s Schlener. “There’s more significant and meaningful collaboration. ... Not sending an email to three colleagues saying, ‘Hey, here’s a new idea that I’m running with,’ but rather trying to encourage people to sit down and co-create things. That has been a significant change.”